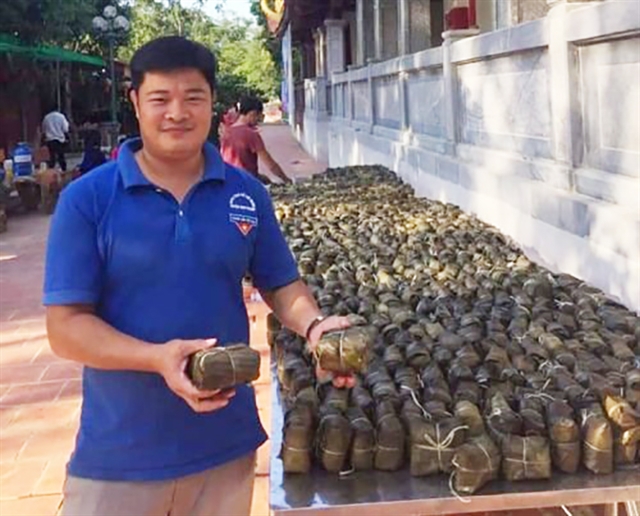 Trần Mạnh Quý, in Xuân Du Commune, Thanh Hóa Province, has been recognised by the Việt Nam Youth Federation for his contribution to society. — Photo tuoitrethanhhoa.vn

Trần Mạnh Quý, 32, lives in Xuân Du Commune, Như Thanh, Thanh Hóa Province. His income has hit VNĐ700 million (US$30,300) per year and he has created jobs for 10 local residents with a stable salary of VNĐ5 million each monthly.

Born into a farming family in a poor mountainous region, Quý had a tough childhood.

After graduating from Hà Nội University of Physical Education and Sports, he worked all kinds of jobs but still could not afford to care for his family.

In 2012, he realised the land of his hometown was suitable for growing peaches and learned through newspapers and the internet about how to raise chickens under peach trees.

After months of thinking, he decided to leave Hà Nội to return to his hometown to chase his chicken and peaches dream.

"To implement this agricultural combined model, I had to borrow VNĐ150 million from relatives and a local bank," he said.

Initially, he only raised 200 chickens and planted 200 peach trees and some other fruit trees.

Because he did not have experience in farming and breeding, he encountered many difficulties and the baby chickens died frequently.

With perseverance and an inquisitive spirit, he overcame the difficulties, and improve his skills day by day.

In 2015, he sold many batches of chickens and decided to expand production by planting 300 more peach and other fruit trees, breeding another 800 chickens and digging fish ponds.

"To ensure a stable raw source and output, as well as learn experience, I joined a local breeding group with 22 outstanding members," he said.

With his diligent and learning spirit, his farm has expanded to 1.5ha, including 2,000 peach trees, 200 dragon fruit trees and he sells 3,000 chickens raised according to VietGap standards each year.

His farm’s chickens have been certified as hygienic and safe by the Agriculture Department of Như Thanh District.

His farm’s chickens are sold to provincial supermarkets and traders. In the Tết (Lunar New Year) period, he sold 500 peach trees and 1,500 chickens.

As well as running his business, Quý is the Deputy Secretary of the Xuân Du Commune Youth Union and helps clean village roads and build charity houses for local residents.

He led the youth union groups to guide local people on how to protect themselves when from the COVID-19 pandemic.

He also encouraged local villagers and youth union members to donate flood to people in flooded parts of the central provinces.

On his plans for the future, Quý said: "I will expand the farm and guide the youth union members to develop the economic model by sharing techniques and breeds.”

"He has contributed to building a beautiful image of Thanh Hóa Province’s youth who always devote their work to the community," Hưng said.

Quý was honoured as a ‘Model youth example in 2020’ by the Việt Nam Youth Federation. — VNS

Young man in Thanh Hóa leads family out of poverty have 702 words, post on vietnamnews.vn at February 22, 2021. This is cached page on Talk Vietnam. If you want remove this page, please contact us.