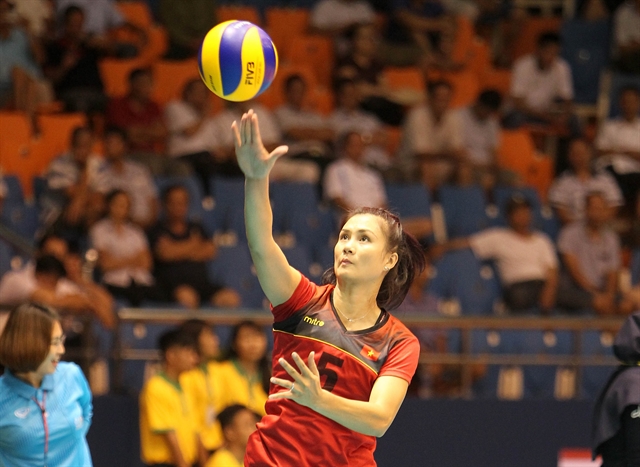 Despite nearly 20 years of difficulties and challenges in the sport, Phạm Thị Kim Huệ has never felt tired of volleyball.

She has just been hired as head coach of Vietinbank, one of the nation’s strongest clubs, ahead of the new season. In her new role, national team legend Huệ has the chance to write a new chapter in her storied career.

The 14-year-old girl knew nothing about volleyball when she was at the Military Signal Corps Command's training course in 1996.

Huệ was invited to try out for the club after she impressed scouts with her height of about 1.7m. She immediately found that volleyball suited her better than the track-and-field events she had been training for.

Her switch of sport marked a turning point in her life.

Two years after that, Huệ first played as a professional player. Three years later, she became the youngest ever skipper of the club at the age of 19. She also captained Vietinbank when she moved there in 2012.

In 2002, the core player of the national team was given the captain’s armband, making her the youngest national captain in history when she was nearly 20.

The 1.81m player was considered the best middle blocker who could read matches and made powerful spikes from the backline in Southeast Asia in her peak of 2002-06. With an average of 20 points per match, she was called a point machine.

At the club level, Huệ is no doubt the country’s most successful player. She has a record of 17 years in a row competing at the national championship. She has won all the best individual titles together with nine national trophies along with gold medals from national cups.

With the national team, Huệ pocketed six silvers and one bronze at the Southeast Asian Games.

She also drew fans to the court to cheer on the team and to watch the transcendent talent Huệ.

"Huệ was a talented player. She was hard-working, had good technique and played smartly," said coach Lê Văn Dũng of Vietinbank.

Meanwhile, her teammates appreciated her a lot.

"She is our idol. She is old but she is strong in both physique and mind. Her presence on the course makes us feel more comfortable and determined to win. We all want to be like her. She is the symbol of success," said spiker Đinh Thị Thúy. 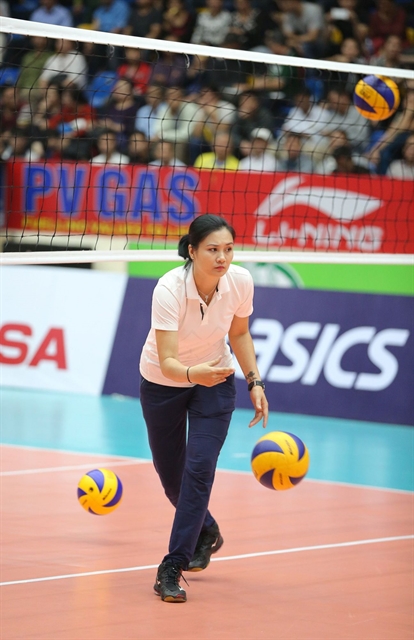 Huệ retired from the national team in 2013 to focus on her club. She also asked to work as a coach at Vietinbank after helping the team win the national title in 2016. But due to a lack of playing personnel, she only moved into coaching in 2018.

After two years working as an assistant coach, Huệ took the head coach role after her predecessor quit at the end of 2020.

Huệ's national U23 championship trophy and her brilliant playing career gave the Vietinbank bosses faith she would be a success.

However, it will be a tough task for Huệ, taking over a club in turmoil that finished fourth last year.

Over the last months, many players including talented middle blocker Lưu Thị Huệ and spiker Vi Thị Như Quỳnh have moved on for various reasons.

"I was a little worried at first when I was appointed. I also felt a heavy pressure in the new position," said Huệ.

"I will have to work out plans for this current situation of Vietinbank. I will have to hire players from other teams to fill the holes in my squad. At the same time, I will have to train hard for my young players.

"It will be a difficult task but I have to step by step solve the problem. I hope that it will be okay gradually," she said.

Huệ has had to call back former player Đoàn Thị Xuân who has been retired for years. She also has to rely on veteran players such as setter Hà Thị Hoa and spiker Nguyễn Thị Xuân.

The head coach will also come out of retirement and play if required this season.

"Huệ was an incredible player, a mirror for anyone in the team. Despite her age, Huệ's volleys are always difficult for anyone. Her physique and experience were the treasure of our team, and none can replace her currently," coach Nguyễn Tuấn Kiệt talked about his former player and assistant.

"When she joined my coaching board, she was a dedicated trainer who received players' respect and love," he said and hoped that his successor would have success as a head coach.

"Volleyball has brought me sadness and pride. I have never regretted my career," said Huệ who broke up with her husband when she dedicated herself to the sport.

"But I have two things that make me upset. The first one was a gold medal with Việt Nam at the SEA Games. We lost to Thailand in the final.

"The second one is that I could not compete abroad although I have received a number of offers. It was because of complicated regulations in Việt Nam.

"I hope under my reign my players could do those tasks for me. They will prove that Việt Nam also has international talented players," said Huệ, who has also taken up another new challenge by playing golf.

"It is not easy. I need time for it but I am thinking seriously about playing golf as a pro. Like other sports, in golf, practice makes perfect." — VNS

Volleyball legend Huệ starts new chapter in storied career have 1161 words, post on vietnamnews.vn at February 24, 2021. This is cached page on Talk Vietnam. If you want remove this page, please contact us.