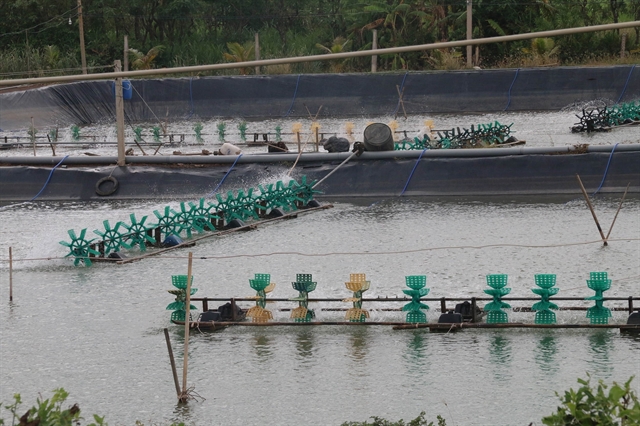 TIỀN GIANG – Farmers in the Cửu Long (Mekong) Delta province of Tiền Giang are raising the fry of high – value aquatic species on an area of more than 6,000ha this year, up marginally from last year, according to the province's Department of Agriculture and Rural Development.

The farmers have harvested nearly 11,000 tonnes so far this year for both domestic consumption and processing for exports, also marginally higher than in the same period last year.

With a coastline of 32km and a dense river and canal network, the province has a huge advantage in terms of breeding all kinds of aquatic species, whether saltwater, brackish or freshwater.

It has developed a number of farming models and bred various aquatic species suitable for each area.

In coastal areas in the downstream region of the Tiền River, a tributary of the Mekong, black tiger shrimp and white-legged shrimp are bred.

Tra is bred in islets further upstream on the Tiền River in Cai Lậy and Cái Bè districts.

It has established areas for farming fish in floating cages along the Tiền River.

It has a 2,200ha clam farming area on the Tân Thành coast in Gò Công Đông District.

Last year it suffered severe saltwater intrusion in the dry season, but aquaculture was not affected much and most farmers enjoyed high and steady incomes.

Farmers are breeding tra fish on around 100ha to supply processors for exports.

The two-stage model requires various ponds for breeding shrimp and treating water. Juvenile shrimp are first bred in the nursery pond for a few weeks before being transferred to the main pond for intensive breeding.

The shrimp breeding ponds are equipped with oxygenation facilities, anti-sunlight nets and plastic sheets on the bed.

Both models offer a high yield of 40 – 50 tonnes per hectare per crop.

Many farmers have begun breeding new species like crocodiles and fry since they offer high incomes.

The province has 76.2ha of aquaculture farms adopting VietGAP or GlobalGAP standards. – VNS

Tiền Giang aquaculture area, output edge up have 586 words, post on vietnamnews.vn at February 20, 2021. This is cached page on Talk Vietnam. If you want remove this page, please contact us.