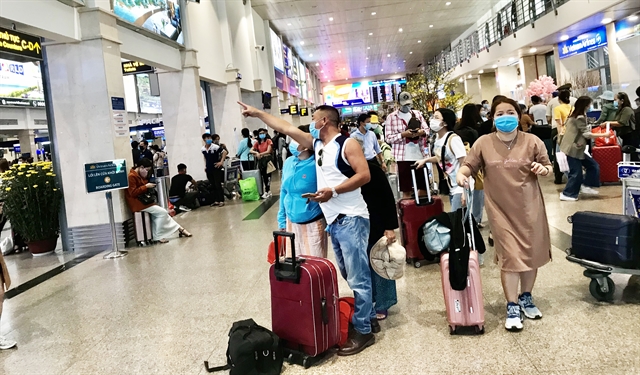 Passengers at the domestic terminal at Tân Sơn Nhất international airport in HCM City prior to the Lunar New Year. The country's busiest airport has been seriously overloaded both on the ground and in the air for years. VNS Photo Bồ Xuân Hiệp

HCM CITY — The Ministry of Transport has approved the addition of a weather surveillance radar station to the detailed plan to expand HCM City's Tân Sơn Nhất International Airport to both the north and south to serve 50 million passengers per year by 2030.

Under the adjusted plan, the Doppler Weather Radar station will be built on an area of 1,600 square metres to the north of the airport. A multi-storey car park will also be built, which will be connected to a new passenger terminal to be built soon.

Under the plan, the airport will cover a total area of 791ha, an increase of 250ha compared to the existing airport area of 545ha.

About 19ha of military defence land has been handed over for building aircraft parking aprons.

An additional eight taxiways will be built to expedite aircraft take-offs and landings.

At least 56 aprons will be added in front of the new passenger terminal T3 and in the southwest area of the airport, increasing the total number of aprons to 106.

In the northern area of the airport, a reservoir with an advanced pumping station to prevent flooding will also be built.

In addition, roads connecting to the airport will be built as soon as possible under the city’s transport plan.

To ensure the progress of the expansion plan, priority will be given to the construction of a new international terminal T3.

According to a proposal by the Airports Corporation of Việt Nam (ACV), the third passenger terminal with a total investment of more than VNĐ11.43 trillion ($494.4 million) will be built in the south of the airport. ACV will invest in building the new terminal, using 100 per cent of its corporate capital.

The existing passenger terminals T1 and T2 will be expanded to accommodate an additional 30 million passengers per year by 2030.

The new terminal capable of handling 20 million passengers per year will take 43 months to build, according to ACV.

In total, the airport is expected to have a total capacity of up to 50 million passengers per year by 2030.

Tân Sơn Nhất airport, the country's busiest airport, has been seriously overloaded, both on the ground and in the air for years, forcing many flights to wait in the air to land.

In a related issue, work began early this year on the massive Long Thành International Airport in the neighbouring province of Đồng Nai, expected to ultimately handle 60-70 million passengers per year. It's expected to ease the overloading at Tân Sơn Nhất airport.

However, the huge airport will not be completed until at least 2025 because of "a lack of capital and slow compensation progress," experts have warned.

Tân Sơn Nhất airport to serve 50m passengers a year by 2030 have 677 words, post on vietnamnews.vn at February 27, 2021. This is cached page on Talk Vietnam. If you want remove this page, please contact us.