Hà My Yoga was founded by yoga teacher Lê Hà My and specialises in teaching beginners the basics of the spiritual discipline and how to avoid injuries in those less-than-limber early days.

Despite now being based in Sweden, she continues to teach Vietnamese students via her archive of online videos and also writes about how to use props to make it easier to practise. A book is also in the pipeline.

She first practised yoga seriously in 2016. As someone who enjoys sport and movement and had tried many different things, she found savasana — the five minutes of rest at the end of every yoga class — to be unique compared to other practices.

Later on, she aspired to teach to the standard of Indian teachers and fortunately won a scholarship for a training course at the Om Factory HANOI – School of Yoga. And that was when she underwent a change in career.

HELP FOR BEGINNERS: Hà My and one of her many props. Photo Hà My Yoga

Her previous job in HCM City didn't have a fixed schedule and was quite stressful. She quit that job to fully focus on the 200 hours of teacher training, and when a later opportunity fell through she decided to stay in Sweden and start teaching yoga.

Within a few months, she was at it full-time, with up to 20 hours of classes a week. She practised providing instructions in both Vietnamese and Swedish simultaneously, and was also able to plan classes under any topic the studio asked of her.

"The best part about teaching at Om Factory, which is a big studio, is how I receive constant feedback from the sales team, which originates from customers," Hà My said.

"After a year of working there, I gained so much experience that I now teach better classes and deliver better value for money to students.

"My favourite thing about practising yoga is how much calmer I have become. As a career, I'm very serious about it, to the point that I want to pass down the craft and the business to my future children and grandchildren. I used to always show up late at my old job, but that has never happened since I started teaching yoga and engaged in constant self-reflection."

When asked why she focuses on props and beginners, Hà My said that both are interrelated. Since moving to Sweden, she must be her own boss and find her own students, so she narrowed it down to beginners.

"I learned a tip from marketing classes: non-users always outnumber users, so I wanted to target those who were entirely new to yoga," she said.

She has come to better understand the perspective of beginners and their concern about injuries. The focus on props allows beginners to gain similar benefits from the different poses, with the goal being to later discard the props.

EASY AS 1, 2, 3: Three different stages are presented via simple illustrations for students to get into the Warrior 3 pose. Photo Hà My Yoga

The yoga market in developed countries like Sweden has now become saturated, and it's hard to stand out. In Việt Nam, which is still a relatively new market, she feels more helpful and appreciated.

Hà My actually had the idea for an online video archive before COVID-19 pandemic struck.

"Online classes allow me to retain and share the same information, and so many more people can access it compared to the naturally limited number of students in a studio," she explained. "So I systemised my knowledge into a comprehensive online class."

Her online classess were originally targeted towards customers in Sweden. Vietnamese people also expressed interest so she made a version in Vietnamese. 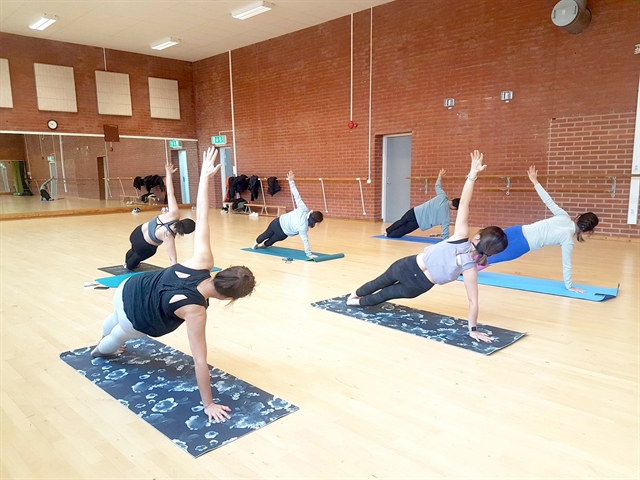 Filming and completing full classes online wasn't so easy for a one-person business.

"There are so many mishaps with cameras and mics," she said. "Each class is an hour long, so if something goes wrong I have to re-record the entire class. It's a lot harder than it seems, with filming and editing."

While some people believe beginners should start practising in a studio, Hà My believes she can instruct them much better via her videos. Her instructions clearly explain what people often do wrong, so students can easily get into the right pose. The only difficulty is for students to practise in their own time, as it's easy to slacken off without an official schedule.

Learning how to run her business on multiple platforms has meant acquiring a lot of new knowledge.

"Everything I did looked so amateurish early on," she recalled. "But along the way, I figured out how to cut costs and attract more customers. It's been hard, but I just need to keep going, because finishing it is better than perfecting it."

Right now, Hà My is working on more videos for people who have completed her 42-hour class package. She is also teaming up with another teacher to create an online yoga platform.

Her goal for this year is to receive more help instead of doing it all by herself, to make the entire process more efficient. – VNS

Remote classes a winner for yoga teacher have 1064 words, post on vietnamnews.vn at February 28, 2021. This is cached page on Talk Vietnam. If you want remove this page, please contact us.