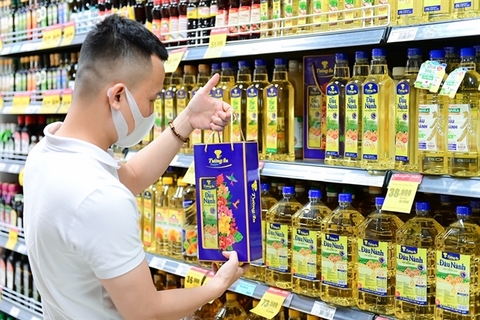 A customer buys KIDO's product at a supermarket.

Food company KIDO Group has reported a 100 per cent year-on-year jump in revenues in January to VND1.1 trillion (US$48 million).

The company attributed the surge to Lunar New Year demand.

It is a major festival for Vietnamese, and, thanks to its subsidiaries' preparations since last October, they were able to diversify their products and distribute them through both traditional and modern channels in cities and rural areas, the company said.

Acquisitions helped it increase distribution to 450,000 points for canned foods and 120,000 for chilled products, it said.

Besides, after a gap, it returned to the confectionery market before the Lunar New Year.

To achieve them, it plans to diversify its oil products and strengthen distribution, and maintain its leadership in the ice-cream segment. It has a market share of 43.5 per cent.

KIDO had announced plans to bring more snacking products to the market in 2021 and develop its moon cake business.

It expects snacks to be the major contributor to its revenues and profits this year.

Also this year products its joint venture with Vinamilk will make will hit the market.

KIDO Group doubles revenues, triples profits in January have 339 words, post on bizhub.vn at February 24, 2021. This is cached page on Talk Vietnam. If you want remove this page, please contact us.