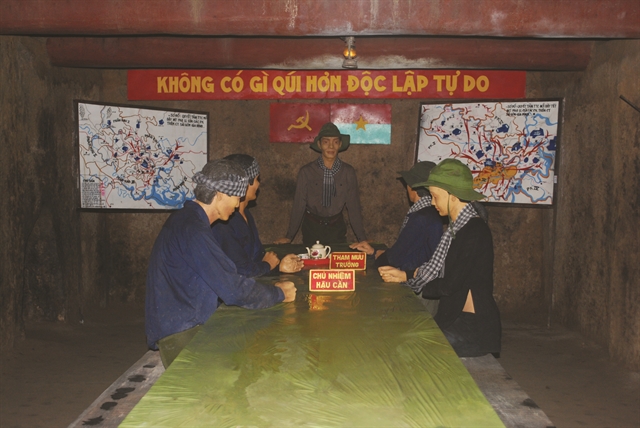 The Củ Chi tunnels were the location of several military campaigns during the Vietnam War. Photo courtesy of Củ Chi Tunnels

When people think of the most modern and crowded city in Việt Nam, HCM City first comes to mind.

But the city, the country’s largest, also has a great deal of historical value related to the wars of resistance against the French and Americans to offer interest to tourists as well as locals.

One of the most fascinating destinations is Củ Chi guerrilla warfare tunnels, located about 70km from downtown HCM City.

Built by South Vietnamese liberation forces as shelter from US and Sài Gòn troops during the war, the site is known over the world, but even many locals have yet to visit the tunnels.

The entrance of one of the guerrilla warfare tunnels in Củ Chi. VNS Photo Xuân Đăng

First formed in 1948 during the resistance war against the French colonialists, the original network of tunnels was in Tân Phú Trung and Phước Vĩnh An wards.

Initially, the tunnels had only short paths and simple structure that were used to hide documents, weapons and resistance members deep inside the enemy-controlled area.

Only during the anti-American war were the tunnels reinforced and widened.

Beginning in 1961, when the Party Committee and headquarters of the Sài Gòn-Gia Định Military Region of the liberation forces chose Củ Chi as an operating area, the tunnel system maximized its use for years, especially in 1966, against the Americans broadening the war in the South. 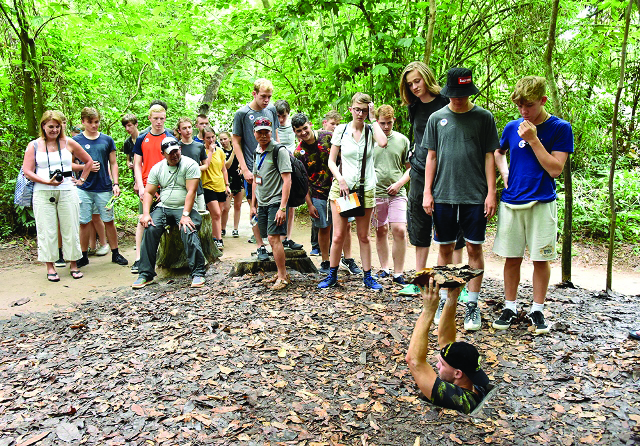 With their indomitable strength, Củ Chi's resistance forces and local people created a system of crisscrossing tunnels with multiple floors, with more than 200km of underground trenches in total.

For a long time, the enemy attacked the base and the tunnel network relentlessly by pumping water into the tunnels, using German shepherd dogs to hunt and identify the tunnels then using bombs to destroy them.

The US forces were involved in 5,000 attacks that aimed to wipe out the Củ Chi resistance base. In addition, thousands of tonnes of various chemical toxins were sprayed on the area.

But, relying on the tunnel network, the Vietnamese liberation soldiers and Củ Chi locals were able to counter all the enemy attacks. 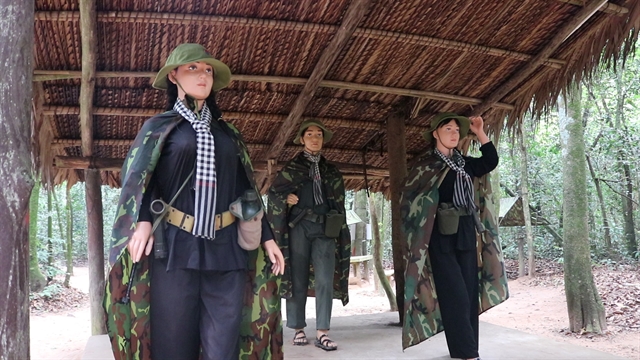 Throughout the two resistance wars against the French and the Americans, the resistance army and the people of Củ Chi achieved outstanding victories.

They engaged in 4,269 big and small fights, eliminated 22,582 enemy troops, destroyed and took over 5,168 military vehicles (mostly tanks and armoured vehicles), shot down and destroyed 256 airplanes (mainly helicopters), sank and burned 22 warships and boats, and captured 8,581 guns of all types. They also destroyed 270 enemy stations in Củ Chi District. 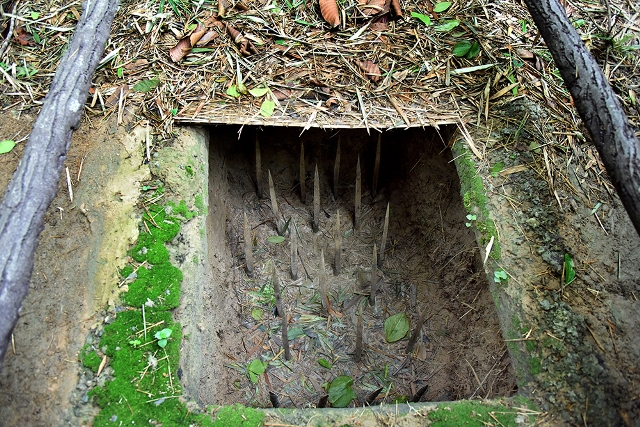 A booby trap with iron sticks set up for guerrilla warfare. Photo vietnamtourism.gov.vn

The tunnel system runs in a zig-zag shape underground, and the main route branches out in multiple directions that connect in some areas, depending on the terrain.

Many exits open to the Sài Gòn River so that when emergencies occurred people could take river route to Bến Cát resistance base in Bình Dương Province.

The tunnel system is bulletproof and can withstand the weight of tanks and armoured vehicles.

Some tunnels have structures that include two to three floors. Stairs between floors have lids that go to secret vaults. 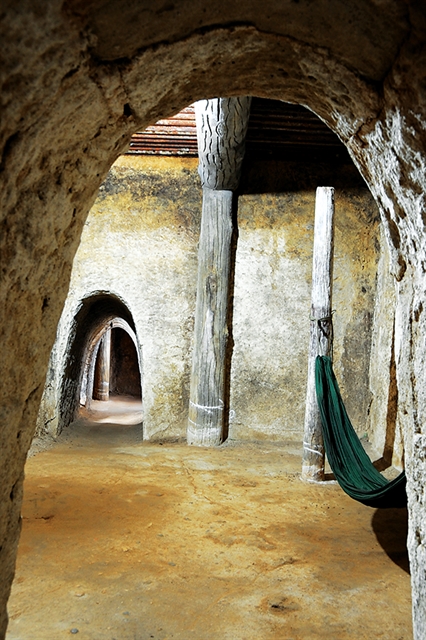 Inside the tunnels are areas that could prevent toxic chemicals sprays or the enemy’s break-ins. There are pathways so narrow that people have to turn sideways to enter.

The exits were well camouflaged to avoid enemy detection. Some of them were also designed as flexible combat and sniping spots to counter enemy attacks.

Around the tunnel entrances, booby traps were placed to prevent enemy entry.

Throughout the war, the tunnels in Củ Chi proved to be a source of frustration for the US and Sài Gòn troops. The Vietnamese liberation soldiers were so well entrenched in the area by 1965 that they were in the unique position of being able to control where and when battles would take place.

By helping to covertly move supplies and house troops, the tunnels of Củ Chi allowed Vietnamese fighters to survive and increase the US and Sài Gòn military casualties until the US withdrawal from the South in 1973, and their final defeat in 1975.

The Củ Chi Tunnels reflect the Vietnamese military arts and the revolutionary heroism and courageous mindset of the people.

The tunnel architecture, with its outstanding innovations, played a part in the anti-American war.

Today, the site educates people about the Vietnamese revolutionary tradition and patriotism and shows appreciation for the war heroes, war martyrs and previous generations who fought and died in the Sài Gòn-Chợ Lớn-Gia Định area in two resistance wars.

These values were cited when the Government officially named the site a national historic relic on December 23, 2015.

Recently, the city’s authorities sent a proposal to the Ministry of National Defence to seek the UN culture agency UNESCO’s recognition for the Củ Chi Tunnels as a World Heritage Site.

Việt Nam is home to eight UNESCO World Heritage sites, including Phong Nha-Kẻ Bàng National Park, Mỹ Sơn Sanctuary, Hội An Ancient Town, the Complex of Huế Monuments, and the Citadel of the Hồ dynasty in the central region.

The other sites are Hạ Long Bay, the Tràng An Landscape Complex, and Thăng Long Imperial Citadel, which are located in the north.

If the Củ Chi Tunnels network is recognised, it will be the south's first UNESCO World Heritage Site.

In 2015, the historic area was recognised as a special national relic site. For tourism purposes, more than 120km out of over 200km of the tunnels have been preserved.

Lê Văn Liêm, vice chairman of the HCM City People's Committee, said the area in the outlying Củ Chi District is a “valuable historical and cultural site that reflects outstanding military and scientific work of the Vietnamese people”.

The tunnels have been a popular tourism landmark for years, attracting thousands of visitors each day. Visitors are able to experience the resilience and unyielding will of the people who lived in the tunnels during wartime.

Dr Phan An, head of the Southern Institute of Social Sciences, said: "The Củ Chi Tunnels’ architecture is one of a kind. UNESCO World Heritage Site acknowledgement would not just introduce global friends to it, but would also be a chance for Vietnamese nationwide to appreciate the relic more.

"The site has not yet received the acknowledgement it deserves. Many HCM City residents have never visited the site despite its historical importance. Publicity is still limited, leading to inadequate attention for preservation of the relic site. Only a small part is preserved for visits and tourism.

"It runs a high risk of destruction from natural and human impact. So, if UNESCO acknowledges it as a World Heritage Site, local authorities and residents will be more responsible and collectively care for and preserve the entirety of the tunnels. At the same time, it would heighten public awareness about heritage sites like this." VNS