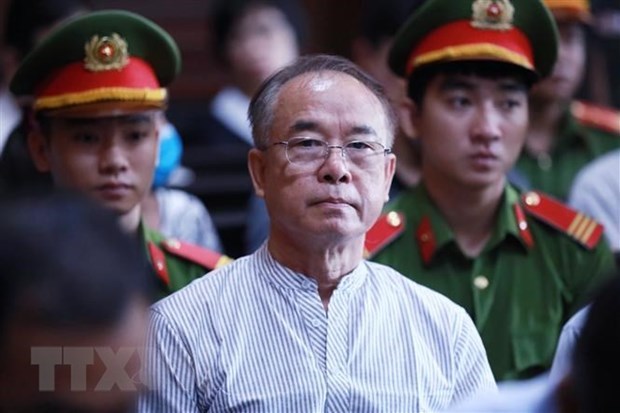 The case involves the land lot at 57 Cao Thang being exchanged for land at 185 Hai Ba Trung , and nine people will be prosecuted for "lack of responsibility, causing serious consequences".

Meanwhile, Duong Thi Bach Diep, director of the Diep Bach Duong Real Estate Co., was charged with "fraud, appropriation of assets". Former Director of the municipal Department of Finance Dao Thi Huong Lan is on the run and being sought.

According to the indictment, the 185 Hai Ba Trung land lot, owned by the State, was the headquarters of the Light Music Centre under the municipal Department of Culture, Sports and Tourism. When the centre downgraded, in 2007, Tao contacted Diep to cooperate in investing in upgrading the headquarters.

Diep then proposed exchanging her land lot at 57 Cao Thang for the 185 Hai Ba Trung land lot, to build a five-star hotel complex.

The property swap was approved by Nguyen Thanh Tai. During the process, Diep used the land use right certificate for 57 Cao Thang to borrow money from Agribank – HCM City branch.

After being granted a land right use certificate at 185 Hai Ba Trung, however, Diep did not lodge this with the bank and withdraw the land use right certificate for 57 Cao Thang from the bank to hand over the land lot to the Light Music Centre, as committed. Instead, Diep continued to use the 185 Hai Ba Trung land lot as collateral for a loan at Southern Bank and cannot repay the debt.

On March 5, 2010, Tai signed a document sent to relevant units approving the exchange of the two land lots, without any request to check and clarify the legal status of the 57 Cao Thang land lot, causing losses of State assets.

The other defendants failed to take responsibility, facilitating Diep's fraud and appropriation of assets./.

Former vice chairman of HCM City to appear in court have 571 words, post on en.vietnamplus.vn at February 26, 2021. This is cached page on Talk Vietnam. If you want remove this page, please contact us.