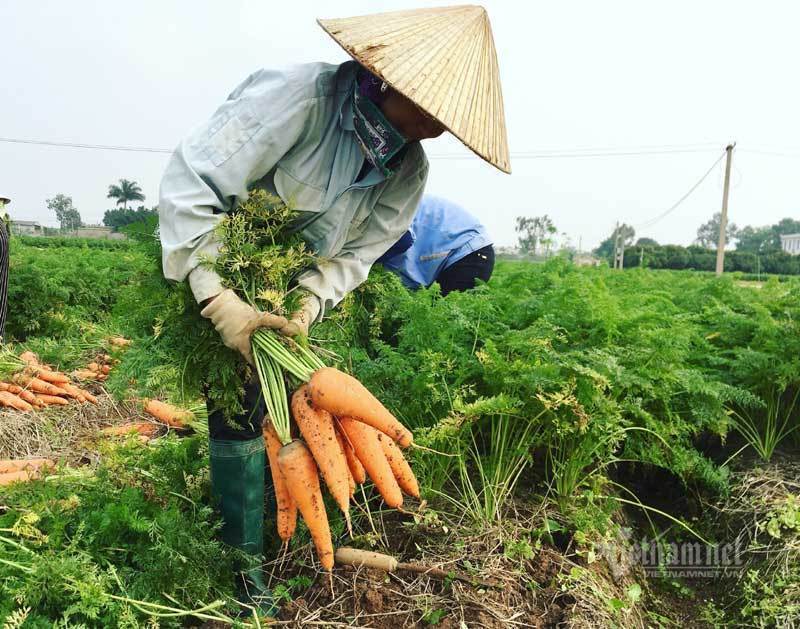 On the morning of February 16, Nguyen Van Phuong in Duc Chinh commune of Cam Giang district was at home waiting for merchants to come to collect carrots.

"The carrot field in our hamlet is still green. Carrots have not been harvested much because of Covid-19. I hope the pandemic is over soon so that we can sell carrots, or they will spoil in several days," he said.

Phuong's family has one mau (equal to 3,600 square meters) carrot field. He harvested carrots on three sao (1 sao is equal to 360 square meters) for Tet sales and received VND7 million per sao.

On average, he made a profit of VND3.5 million for each sao and thought he would pocket a relatively high profit.

However, that has not happened. Merchants have hesitated to come to Hai Duong to collect farm produce, because it is a Covid-19 hotspot. After collecting produce in Hai Duong and leaving the province, merchants have to start their quarantine period. As a result, local farm produce remains unsold.

"We still have 16-17 tons of carrots which were grown for four months and need urgent harvesting," he said.

If carrots are harvested in time, they have high quality and good appearance. If they are grown for too long and face rain and strong sunshine, they will rot.

Thuy, who has one mau of carrot field in Duc Chinh commune, complained that sales have been going very slowly.

Farmers in Duc Chinh commune said many merchants came to place orders with farmers many days ago and they have come back just to collect the output they ordered, and have not made new purchases.

According to the Hai Duong Department of Agriculture and Rural Development, about 4,087 hectares of winter vegetables needed harvesting as of February 14, with total estimated output of 90,767 tons. Because of Covid-19, farmers face difficulties in transportation and sales.

The department has requested the provincial Steering Committee for Covid-19 Prevention and Control and local departments to create favorable conditions for trucks carrying produce to go in and out of the province.

It proposed that the healthcare system prioritize taking samples and testing all the workers and drivers of carrot processing workshops in the communes of Duc Chinh, Cam Van and Tien Tien. Carrots are being harvested from now to the end of March.

100,000 tons of farm produce stuck in Hai Duong Covid-19 hotspot have 525 words, post on vietnamnet.vn at February 17, 2021. This is cached page on Talk Vietnam. If you want remove this page, please contact us.