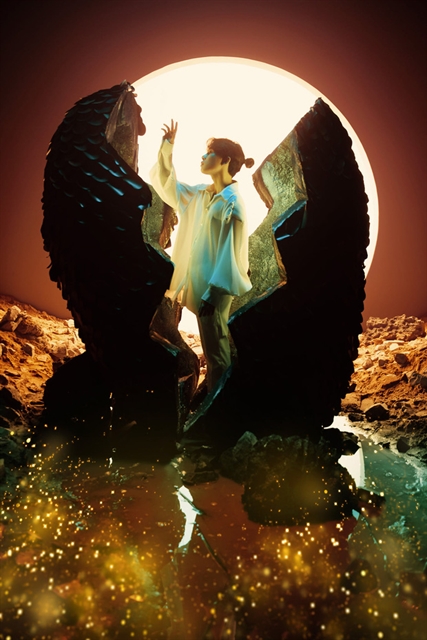 A scene from Jack’s MV Hoa Hải Đường . (Photo courtesy of the producer)

The MV, released in September, ranked No 1 on YouTube trending in Việt Nam 16 hours after its release, with 8.2 million views. It has attracted more than 135.7 million views with 1.5 million comments on YouTube.

Jack was competing with two singers from India and Singapore, and Vietnamese rapper Binz for the award. Rapper Binz’s Bigcityboy, a work by famous producer Hoàng Touliver, was nominated for the award.

The awards presentation ceremony was organised online on January 15-16.

Jack wrote the lyrics for Hoa Hải Đường and he invited producer DTAP to combine modern electronic music with Vietnamese folk melodies for the song.

Pop singer and songwriter Jack of HCM City was honoured at the annual 25th Asian Television Awards (ATA) in Singapore. He won the title Best Music Award for his latest MV, Hoa Hải Đường (Malus Spectabilis), a production about love. The awards presentation ceremony was organised online on January 15-16.  Photo from the singer’s Facebook page

The songs’ MVs have attracted hundreds of millions of views on YouTube.

Jack and K-ICM were honoured by the Mnet Asian Music Awards as Best New Asian Artist Vietnam in 2019.

The duo broke up early last year, and both are building solo careers.

Jack’s previous MV, Being A Boy, released in March, ranked No 1 on trending on YouTube in Việt Nam nine hours after its release, with 4.5 million views. The work has earned more than 145 million views.

The song Being A Boy is written by Jack and mixed by music producer HOAPROX, whose composition appeared in the electronic music album Electric Asia Vol.2: The Best New Hits from Asia released by Billboard in 2018.

The song, a blend of pop and disco, is about the disappointment and sadness of a man who witnesses his lover’s wedding.

“I’m happy that my efforts have gained the love of my fans,” said the 23-year-old Jack.  VNS

Young pop singer wins at Asian Television Awards have 668 words, post on vietnamnews.vn at January 21, 2021. This is cached page on Talk Vietnam. If you want remove this page, please contact us.