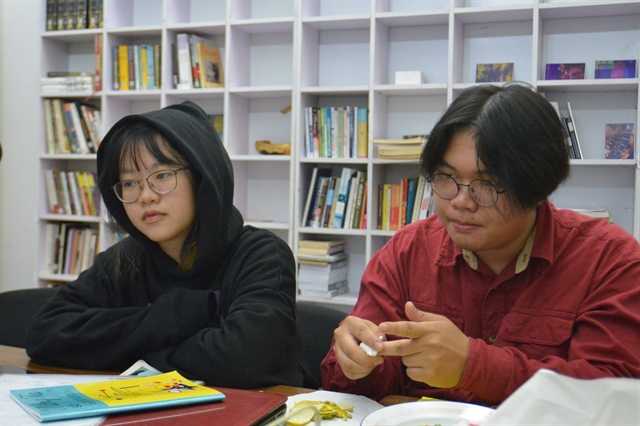 Trang Tung group will have a music installation at the French Cultural Centre until January 28. Photo from Facebook of DomDom – The Hub For Experimental Music & Art

The one-night concert will be held tomorrow as a part of a project funded by the British Council’s FAMLAB Fund aiming to encourage young musicians to write new compositions.

At the concert, Hoài Anh will perform a piece entitled Tưởng (Thought) with the đàn tranh (16 chord-zither) in combination with a video.

Tưởng has many distinct meanings such as reminiscence, contemplation, dreaming, delusions, illusions, and even fantasies.

The concert-goers are invited to listen, observe and feel their way through Tưởng.

Hoàng Anh will show his conceptual music entitled Thôi, Bỏ Đi Bạn Ơi (Get off It, My Friend).

“I am living in a chaotic world, I move around, there are quite a lot of things in life that I care about and I choose to express them in writing, photography, music and documentary film,” said Hoàng Anh.

Trang Tùng group will display objects and arrange sounds which were carefully arranged and selected.

When getting to know the music of chầu văn (spiritual singing) and hầu dồng (trance rituals), Trang and Tùng found in those who practise this religion an unshakable belief.

They hope the audience could also experience a journey to find their own beliefs.

The objects and music extracts they chose are familiar enough so the audience can feel related to the work.

“After spending an amount of time of experiencing hầu dồng rituals and chầu văn melodies, I started asking myself if spiritual belief truly enriches an individual’s materialistic values,” said Tùng.

Their music installation will be on show at L’Espace until January 28.

After the concert, an artist talk will be held at Erato School of Music & Performing Art, 30 Đoàn Thị Điểm Street on Saturday. VNS

Young musicians to perform at L'Espace have 574 words, post on vietnamnews.vn at January 22, 2021. This is cached page on Talk Vietnam. If you want remove this page, please contact us.