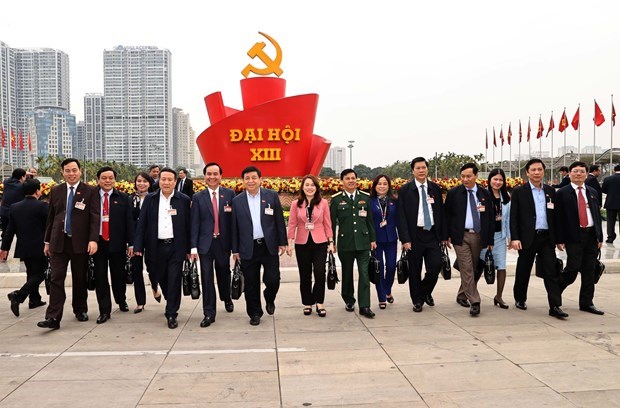 Delegates to the the 13th National Party Congress (Photo: VNA)

New York (VNA) – The Vietnamese community and US scholars in New York have expressed belief that the 13th National Party Congress will work out targets and orientations for Vietnam's development in the future.

In an interview with the Vietnam News Agency in New York, a representative from the Committees of Correspondence for Democracy and Socialism (CCDS), a democratic socialist group in the US, held that the congress has an ambitious and inspiring agenda as it will sketch out the development orientations for the country in the next five years and further future.

It extended a message of solidarity to the Party, Government and people of Vietnam, and pledged to continue to join the struggle to request the US government to compensate for Agent Orange/dioxin disasters it caused during the war in Vietnam.

Leanna Noble and Hollis Stewart, two US friends of Vietnam who joined anti-war protests in the 1960s and 1970s and used to work as lecturers at Ton Duc Thang University between 2013-2016, said that they have witnessed Vietnam's efforts in economic development, giving more opportunities for women and people from ethnic minority groups, and ensuring justice in workplace. They showed their delight at Vietnam's success in COVID-19 control.

At the same time, Cathy Dang, an overseas Vietnamese, said that she is impressed by Vietnam's attainments in national reconstruction and development as well as the country's observation of human rights right after the end of the war./.

Overseas Vietnamese, US experts show solidarity to 13th National Party Congress have 393 words, post on en.vietnamplus.vn at January 29, 2021. This is cached page on Talk Vietnam. If you want remove this page, please contact us.