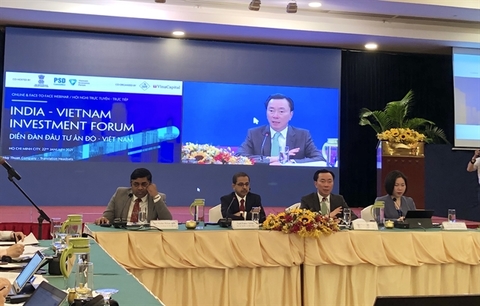 The India-Viet Nam Business Forum was held in HCM City last week in the form of virtual and in person. — VNS Photo

Trade and investment ties between Viet Nam and India, both dynamic and rapidly developing economies, are not commensurate with the potential and need to be enhanced, according to their officials and diplomats.

Speaking at an online and face-to-face webinar on the India –Viet Nam Investment Forum held in HCM City last week, Pranay Verma, India’s ambassador to Viet Nam, said Viet Nam was an important trade and investment partner for his country, but bilateral trade and investment remained low compared to the potential.

“We need to … identify new areas and explore new opportunities.”

Four areas in which Indian companies have strength and technological know-how, infrastructure, energy including renewables, IT, and pharmaceuticals, are among the sectors they need to promote co-operation and engagement, besides healthcare and the digital economy, according to the ambassador.

Deputy Minister of Planning and Investment Tran Duy Dong said, “In order to take advantage of the opportunities after the Covid-19 pandemic, it is time now for Vietnamese and Indian businesses to grasp opportunities for co-operation and diversifying supply sources to together penetrate the global value chain deeper.

“These are areas in which Indian businesses have strengths and are in line with Viet Nam’s desire to attract foreign investment.”

Don Lam, deputy chairman of the Committee IV under the Prime Minister’s Advisory Council for Administrative Procedure Reform and co-founder and CEO of VinaCapital, said, “Vietnamese and Indian companies can leverage their respective strengths and learn from the other in areas such as IT, pharmaceuticals, textiles, renewable energy, and agricultural processing.

“Viet Nam and India are both strong emerging economies, with rich histories and cultures, each focused on improving the lives of their citizens and realising their enormous potentials.

“We are both stronger when we work together to further eliminate the barriers to trade and investment and create even more favourable conditions for businesses to succeed.”

Verma said, “When we talk about an investment partnership, we tend to focus on Indian investment in Viet Nam, but I think as Viet Nam’s economic capacity and economic profile grow, it is time to also focus on the possibility and potential of Vietnamese investment in India.”

Vietnamese investment in India is now only around $30 million, mainly in pharmaceuticals, IT, building materials, and chemicals while India’s is $1.9 billion including through third countries, according to Verma.

There are many sectors in India open to foreign investment, including Vietnamese.

“Areas you have significant strength in, for example, urban infrastructure development, agriculture and food processing, I am very keen to see Vietnamese investors come to invest in India,” he said.

Another area is tourism infrastructure, he said.

India is looking at upgrading tourism infrastructure, and Viet Nam has good experience in promoting tourism, and so “this is one of the areas that India can benefit from Vietnamese investment,” he said.

The Vietnamese ambassador to India, Pham Sanh Chau, said the giant country, with a population of almost 1.4 billion, would be a promising market for Vietnamese enterprises, especially in fields like textiles and food processing.

Sumita Dawra, additional secretary in India’s Department for Promotion of Industry and Internal Trade, said her Government had recently taken steps to facilitate and attract investment.

Don Lam said: “Companies from both countries still know very little about each other or about the opportunities in each market. Part of that is because there is not a lot of promotion. But events like today’s are a good beginning, but we can always do more.”

The Indian consulate general in HCM City has said it would soon organise trade and investment meetings with all 27 provinces under its jurisdiction to invite Indian investment and expand the trade basket.

Organised by the consulate in collaboration with the Prime Minister’s Advisory Council for Administrative Procedure Reform, the Investment and Trade Promotion Centre of HCM City, and VinaCapital Group, the forum attracted nearly 500 Indian and Vietnamese companies. — VNS

Indian, VN agree need for enhancing investment, trade ties have 845 words, post on bizhub.vn at January 25, 2021. This is cached page on Talk Vietnam. If you want remove this page, please contact us.