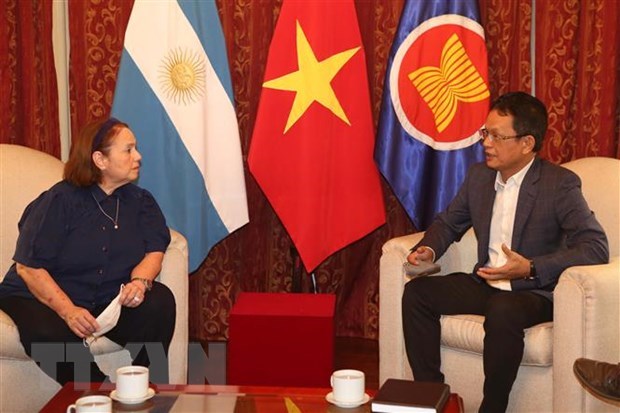 Buenos Aires — Chairwoman of the Argentina-Việt Nam Culture Institute (ICAV) Poldi Sosa Schmidt has attributed Vietnam’s successes to the sound and ingenious leadership of the Communist Party of Việt Nam (CPV) and consensus of the whole nation.

In an interview recently granted to the Vietnam News Agency’s reporter in Buenos Aires, Poldi Sosa said throughout its revolutionary history, the CPV has always played a vanguard role and gathered people from walks of life under its fighting flag to make Việt Nam an independent and sovereign nation. Following national reunification later, the CPV continued affirming its leadership role and mapped out development orientations, riding Vietnam through challenges to gradually prosper economically. In recent years, Việt Nam’s position and voice have been increasingly respected on the international arena.

Poldi Sosa said that she has taken ICAV delegations to Vietnam nearly 20 times since 1998. The country’s changes happen every day and take her from surprise to surprise. The Vietnamese people’s lives have improved significantly over time and the nation has become a destination that many international friends always expect.

She described the upcoming 13th National Congress of the CPV as a significant event to review successes and shortcomings in the past five years, and outline orientations for Việt Nam in the next period amid complicated and uncertain developments in the region and the world.

With solidarity and high consensus in the Party, she believed that the 13th National Party Congress will be a success, opening up a new period of development and success for Vietnam.

The ICAV Chairwoman regularly studies Vietnam’s issues via books published in Spanish language and magazines with stories about its history and people. When Việt Nam is preparing for the 13th National Party Congress, she frequently checks information about this important political event on the Internet to share with her friends as well as at events organised by the ICAV to popularise Việt Nam.

In her young age, Poldi Sosa also joined movements protesting the war in Việt Nam. She founded ICAV and served as its Chairwoman so far, creating a bridge to foster friendship and solidarity with the Vietnamese people, as well as stepping up activities to popularise Việt Nam’s culture and people to Argentine friends. — VNS

Argentine expert attributes Việt Nam’s successes to Party's sound leadership have 509 words, post on vietnamnews.vn at January 24, 2021. This is cached page on Talk Vietnam. If you want remove this page, please contact us.