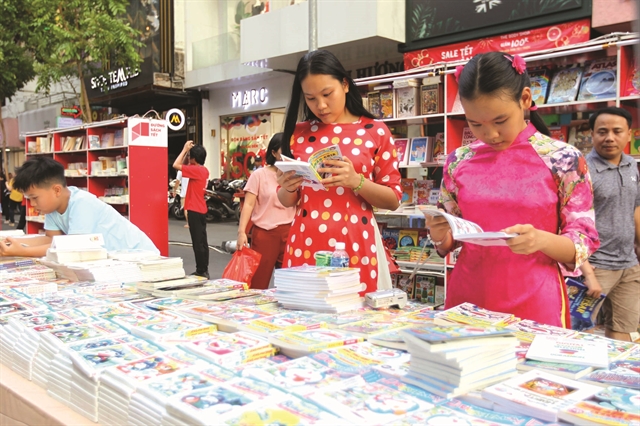 The HCM City’s annual book fair, with the theme of ”‘Knowledge Brings the Future Closer”, will take place downtown from February 9-15. It aims to promote a reading culture among the city’s people and create an entertaining and cultural spot during the Tết holiday. VNA/VNS Photo by Thanh Vũ

This 11th book fair, with the theme ”Knowledge Brings the Future Closer”, aims to promote the reading culture among the city’s people and create an entertaining and cultural spot during the Tết holiday.

The fair will display around 20,000 book titles in various topics from the city’s major publishers and book distributors, including the HCM City Book Distribution Corporation, Phương Nam Books, and the HCM City General Publishing House.

Most of the books will highlight topics of business, start-ups, industrial revolution 4.0, digital transformation, science and space.

A kids’ zone called “Travelling into the World of Books” will feature new and popular children’s books by famous Vietnamese authors such as Nguyễn Nhật Ánh and Nguyễn Quang Thiều.

The zone will also include a virtual reality system that will help children step into the book’s worlds and promote their imagination and creativity.

The book fair’s highlight will be an exhibition of pictures and articles about President Hồ Chí Minh, the city’s outstanding architectural sites, and the new establishment of Thủ Đức City.

A replica of the Metro Line 1 (Bến Thành – Suối Tiên) will be set up for visitors to have a closer look and understanding of the city’s first metro route.

The fair will also include an exhibition of publications and photos about Việt Nam’s sea and islands.

In addition, there will be several talks between authors and cultural experts and visitors during the event.

The fair, which will take place on Mạc Thị Bưởi, Nguyễn Huệ and Ngô Đức Kế streets in District 1, is expected to attract around about one million visitors. — VNS

Annual Tết book fair to open in downtown HCM City have 537 words, post on vietnamnews.vn at January 27, 2021. This is cached page on Talk Vietnam. If you want remove this page, please contact us.