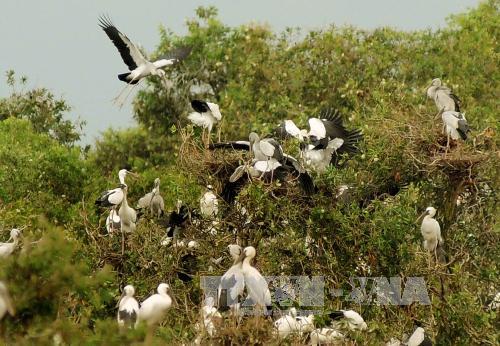 HCM CITY — The number of species of wild birds, fish, and plants in the Cửu Long River (Mekong) Delta has fallen rapidly in recent years because of a decline in food resources and natural habitats.

In Tràm Chim National Park in Đồng Tháp Province, 13 bird species are in danger of extinction and need protection, according to park authorities.

The number of red-headed cranes returning to the park fell from more than 1,000 in 1988 to nine in 2019, and none this year. This was partly due to a decline in cỏ năng kim (Eleocharis ochrostachys) and cỏ năng ống (Eleocharis dulcis) which provide food for the bird.

Red-headed cranes, which stand up to 1.8 metres tall and are the world’s tallest flying bird, are the symbol of the park.

The park, which covers an area of more than 7,300ha and contains mostly cajuput trees, is a Ramsar wetlands site of international importance.

The park has about 800ha of lúa ma, which can be translated to ‘ghost rice’ (Oryza rufipogon) for its ability to survive flooding. The rice variety has genes which scientists use to create new rice varieties as the rice can grow in alum-affected soil and is highly resistant to diseases transmitted by brown planthoppers and white-backed planthoppers, and can grow in deep floodwater.

In the past, lúa ma grew wildly in the delta’s flooded areas during the flooding season, but the rice variety now exists in only a few places in the delta, including in the park.

In An Giang and Đồng Tháp, the number of basa catfish fish in the wild has become scarce because of the low level of floods caused by the rising level of the Mekong River in the rainy season.

Nguyễn Hữu Nguyên, director of the Châu Thành District Tra Fish Breeding Co-operative in An Giang, said the number of wild basa fish in rivers has become scarce, so fishermen who live on catch the fish have switched to other occupations.

In Cà Mau Province, which is the country’s largest shrimp producer, the number of wild birds has declined significantly in recent years because of hunters and fewer rice fields.

Nguyễn Hữu Dành, 78, from Cà Mau’s Cái Nước District, said that previously most localities in the province planted rice, so many wild birds came and fed on the rice fields.

After more rice farmers in the provinces switched to breeding shrimp, the number of wild birds fell significantly because of the decline in food resources, he said.

Overhunting has also led to the decline in wild birds, according to experts.

To preserve endangered fauna and flora species, local authorities in the delta have focused on preserving wetland areas and forests to provide natural habitats for birds, fish and plants.

In Cà Mau Province, authorities are implementing a plan to develop the Cà Mau City bird garden located in the Hồ Chí Minh President monument area in the 2018-20 period.

They have planted more trees to provide a better habitat for birds, upgraded water ditches in the garden to supply clean water for birds, and solved pollution caused by bird waste.

The 3.1ha garden has about 53 species and 6,600 birds. The number of wild birds at the garden can reach more than 12,000 in the peak reproductive season in June and December.

Every year, the three wetland areas in co-operation with the province’s Forest Protection Sub- department devise plans to protect their biodiversity.

Since 2016, the sub-department, in co-operation with the people’s committees of communes where there are wetland areas and forests, has organised 40 courses for 2,000 residents about legal regulations that protect forests, biodiversity and wild animals.

It has also given local people 1,650 booklets and 19,000 leaflets about protection of wild animals in the forests.

The Tràm Chim National Park is taking steps to preserve the wetland ecosystem and the genes of flora and fauna species, especially endangered birds like the red-headed crane and white-winged duck.

The park is building an experiment station to develop biodiversity, and is investing in infrastructure for ecotourism services.

Cửu Long River Delta faces decline in wild birds, fish and plants have 936 words, post on vietnamnews.vn at December 3, 2020. This is cached page on Talk Vietnam. If you want remove this page, please contact us.