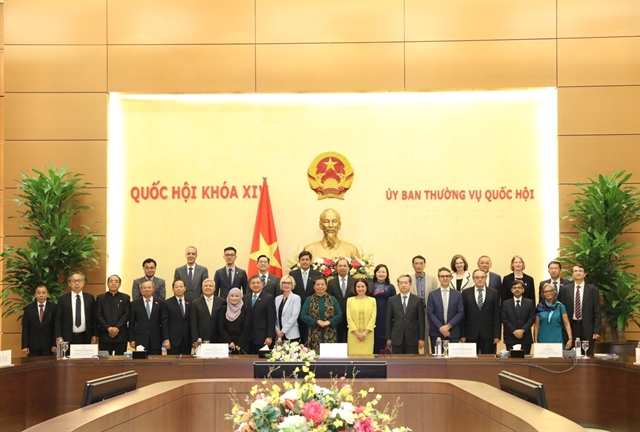 HÀ NỘI — The 41st General Assembly of the ASEAN Inter-Parliamentary Assembly (AIPA41) will be held as a teleconference for the first time between September 8 and 10 under the theme ‘Parliamentary Diplomacy for a Cohesive and Responsive ASEAN Community’.

Preparations for the event from the host Việt Nam are completed, Nguyễn Văn Giàu, chairman of the Vietnamese National Assembly (NA)’s Committee for External Relations, said at a press briefing on Friday.

This will be the third time Việt Nam has acted as host of AIPA General Assembly and held the Chairmanship of the AIPA, after 2002 and 2010. In the context of the COVID-19 pandemic, the Vietnamese NA’s switch to virtual meetings expresses Việt Nam’s flexibility, responsibility and determination, said Nguyễn Mạnh Tiến, vice chairman of the NA’s Committee for External Relations.

The virtual organisation also demonstrates Việt Nam’s capacity to meet technical requirements in terms of digital technology and the internet, he said.

According to Nguyễn Văn Giàu, deputy head of AIPA41’s National Steering Committee and the Organising Board, the AIPA41 General Assembly has witnessed the registration of a large number of delegations with 380 delegates, including 230 parliamentarians, so far.

Eleven of 12 observer countries have confirmed their attendance. President of the Inter-parliamentary Union Gabriela Cuevas Barron, an adviser to the UN Secretary-General, and at least one ASEAN deputy general secretary will attend the general assembly, he said.

The AIPA New Observers Admission Ceremony and AIPA Distinguished Service Award Ceremony will be held within the framework of AIPA41.

The same day, NA vice chairwoman Tòng Thị Phóng chaired a meeting with ambassadors and heads of the diplomatic missions of ASEAN member states, together with observers and guests of the ASEAN Inter-Parliamentary Assembly, ahead of AIPA41.

Phóng, head of the AIPA 41 organising board, took the occasion to thank ambassadors and heads of diplomatic missions in Hà Nội for supporting the Vietnamese NA’s offices in carrying out activities in Việt Nam’s 2020 AIPA Chairmanship Year, especially AIPA41.

She said that as AIPA41 is the most important event in the 2020 AIPA Chairmanship Year, Việt Nam began preparations in 2019, as soon as it took over the AIPA Chair from the Thai National Assembly.

She expressed her hope to continue receiving close and effective co-ordination from participants in organising AIPA41. — VNS

Việt Nam ready for AIPA41 have 671 words, post on vietnamnews.vn at September 5, 2020. This is cached page on Talk Vietnam. If you want remove this page, please contact us.