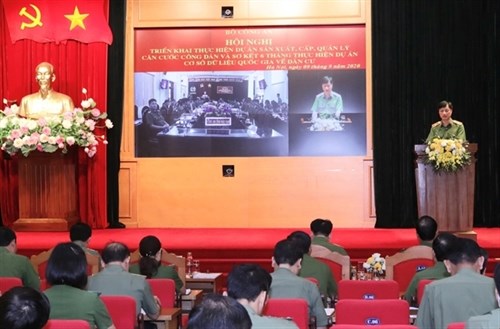 
Hanoi (VNS/VNA) – Fifty million citizens will be issued with new identity cards between now and July next year, the Ministry of Public Security (MoPS) have announced.

The announcement was made at an online conference on implementing the project of manufacturing, granting and managing citizen identity organised by the MoPS on September 9 in Hanoi.

After the Law on Citizens' Identity was passed by the National Assembly, the MoPS organised adjustments, conversions and updated production systems, issuance and management of identity cards to citizenship in 16 localities.

Up to now, nearly 17 million citizen identification cards have been issued. The system is connected, shared and used by State management and professional requirements of the police.

Regarding the project of national database on population, police in different localities have organised training courses on collecting and updating citizen information in the national population database.

By August 20, 59 out of 63 provinces and cities have collected information according to the plan.

Up to now, 14 ministries, ministerial-level agencies and 45 provinces and cities have sent results to the Police Department of Administrative Management of Social Order to connect and share.

But there are still a number of hurdles to overcome because of the sheer volume of cards issued and information that needs to be amended.

Senior Lieutenant Colonel To Anh Dung, deputy director of the Police Department of Administrative Management of Social Order, said that the department had prepared for training in 63 provinces and cities and will ask local police to make a list of officers and soldiers to join training plan.

Speaking at the conference, Deputy Minister of Public Security Nguyen Duy Ngoc asked police departments to study and fully grasp the contents of the Prime Minister Nguyen Xuan Phuc’s direction and the MoPS’s plans to unify the awareness about the importance and urgency of the citizen identification management project.

"We should research to make the most of what has already been done in previous projects to reduce the workload," Ngoc said.

They should also assess the current situation of citizenship identification , perform fingerprint collection serving the project of producing, granting and managing citizen identity , to ensure cards are issued by July 1 next year./.

Ministry of Public Security aims to issue 50 million identification cards by next July have 601 words, post on en.vietnamplus.vn at September 10, 2020. This is cached page on Talk Vietnam. If you want remove this page, please contact us.