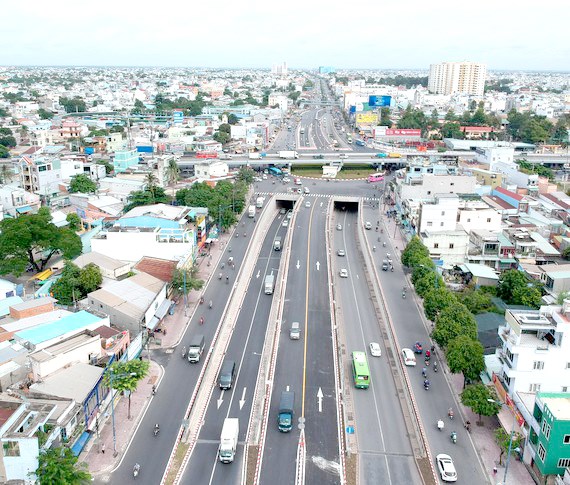 At the city's northwest gateway, the second branch of the An Suong tunnel at the An Suong intersection in District 12 has recently opened to traffic, easing traffic congestion .

The 385-metre branch is exclusively used for automobiles traveling from Cu Chi District to the city centre, according to the HCM City Management Board for Traffic Works Construction and Investment.

The work at An Suong intersection had been suspended since the end of 2018 because of delayed site clearance. Hoc Mon District was not able to hand over land to the investor of the project until October last year.

Luong Minh Phuc, head of the management board, said the An Suong intersection of National Highway 22 and National Highway 1A has for years faced heavy traffic with many container trucks, posing a risk of accidents.

When the entire project is put in use, the three-layer interchange will help reduce congestion and ensure traffic safety.

Construction on the double tunnel at An Suong intersection began in early 2017.
The first branch, which extends from downtown to outlying Cu Chi District, opened in March 2018 after nearly 13 months of construction.

The double tunnel project, with total capital of 514 billion VND (22.14 million USD), was originally expected to be completed within 20 months.

In addition, work began a few months ago on a 830 billion VND (35.6 million USD) project to transform the Nguyen Van Linh-Nguyen Huu Tho intersection in District 7.

This is expected to help tackle traffic gridlock at the city's southern gateway.

The first phase of the project, which is slated to be completed in June 2022, will see the construction of two 480-metre-long tunnels on Nguyen Van Linh, running beneath the intersection.

The tunnels will allow vehicles to head toward the Tan Thuan Export Processing Zone or National Highway 1A without having to cross Nguyen Huu Tho Street, as is currently the case.

The tunnels will be 14m wide and allow speeds of up to 60 kilometres per hour.
Under the second phase of the project, two overpasses will be built at the intersection.

This phase will cost some 1.78 trillion VND since a large amount of ground will need to be cleared to make way for the work.

In addition, a series of works such as the expansion of Luong Dinh Cua and Do Xuan Hop streets, and Thang Long and Cong Ly bridges, will be built from 2021 to 2022, according to the Management Board for Traffic Works Construction and Investment.

The management board has urged district authorities to hand over the land to complete the expansion of Dong Van Cong Street in District 2, as well as construction of My Thuy 3 Bridge, tunnels and overpasses near the new Mien Dong (Eastern) Bus Station in District 9.

Many key projects such as Ring Road No 2, Cat Lai Bridge, Thu Thiem Bridge Nos 2, 3 and 4, and expansion of Nguyen Duy Trinh Street and the An Phu intersection will also be completed from 2023 to 2025, connecting District 2, District 9 and Thu Duc District with the city centre and neighbouring provinces.

As part of a plan to develop the new Thu Duc City in the eastern part of HCM City, a series of key transport projects will also be built to meet the new city's socio-economic development.

Engineer Vu Thang, former deputy head of the HCM City Planning and Investment Department of Transport Infrastructure, said: "Priority will be given to belt road, highway, and urban railway projects. When projects are completed, traffic congestion will be eased and city development will be strengthened."

Luong Minh Phuc, director of the city's Management Board for Traffic Works Construction and Investment, said the city is expected to complete 29 traffic projects this year, including 81km of new roads and 18 bridges./.

HCM City to complete major transport projects at gateways by 2025 have 733 words, post on en.vietnamplus.vn at September 29, 2020. This is cached page on Talk Vietnam. If you want remove this page, please contact us.