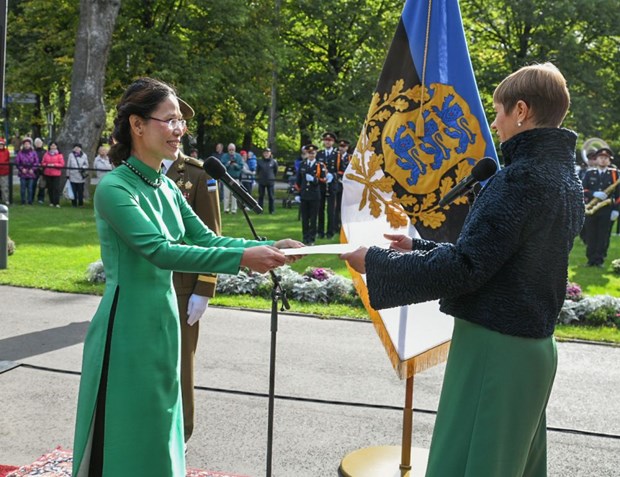 Receiving the diplomat following the presentation ceremony, President Kaljulaid thanked Vietnam for supporting her country to become a non-permanent member of the UN Security Council for 2020-2021, affirming that the two countries will continue their effective coordination at this organisation to promote regional and global security issues.

She welcomed the EU-Vietnam Free Trade Agreement (EVFTA)'s entry into force and considered this deal as an important driving force for bolstering bilateral trade.

The host leader also said she believes the two countries' friendship will be further enhanced in the time ahead, particularly in terms of digitalisation and e-government – one of the areas Estonia is leading the world in.

The President noted that the organisation of the credentials presentation ceremony at the campus of a school in Parnu city was of importance as it showed the priority Estonia gives to education. She voiced the willingness to strengthen ties with Vietnam in this regard.

For her part, Ambassador Tam expressed her determination to promote Vietnam-Estonia cooperation in various aspects, especially digitalisation and e-government./.

Estonian President believes in stronger friendship with Vietnam have 377 words, post on en.vietnamplus.vn at September 24, 2020. This is cached page on Talk Vietnam. If you want remove this page, please contact us.