Stretching 90km along the coast over the Hải Vân Pass to Hội An, fishing villages and crowded fishery communities have been around for centuries. However, temples dedicated to whales – fishermen’s guardian angels – are now the last vestiges of ancient fishing villages that have been replaced by high rise buildings and mass tourism.

Đinh Dũng, 50, usually wakes up at 4am to set off on a fishing trip to the Sơn Trà Peninsular. He is among around 2,000 fishermen from Thọ Quang Village who make a living at sea.

“I’m used to waking up early because I started fishing with my father when I was five years old. Fishing is my family’s trade that we inherited from my grandfather on An Bàng Beach near Hội An. My father later moved to a new life in Sơn Trà,” Dũng said. 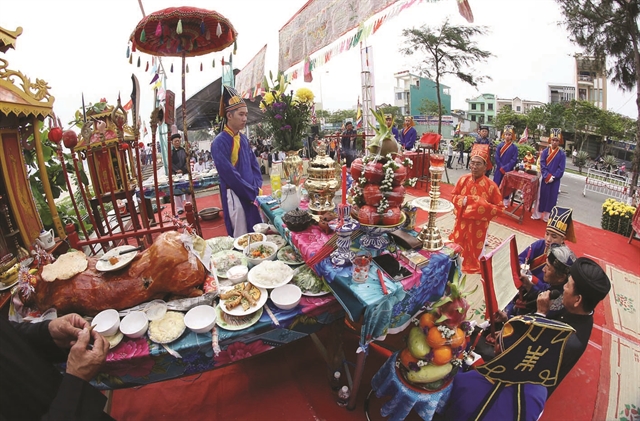 OFFERINGS: A fish festival held on the beach in Đà Nẵng. The festival, which has been recognised as a National Intangible Heritage, is a traditional event held by fishing villages in the central city. VNS Photo Lê Lâm

“I followed my father on large fishing vessels looking for a bumper catch in the waters off the Chàm Islands and back to Sơn Trà in the evening. We still head out to sea, but in smaller bamboo boats for quick trips with higher income by catching squid and lobster,” he explained.

Dũng said he was sent to school before earning his captain’s certificate, but early morning fishing is still his traditional routine due to his love for the sea.

He said fishing and the smell of the ocean were simply part of life.

The coral reefs off Sơn Trà are home to a wealth of sea creatures and fish, so fishermen set traps with bait from the late evening for the next morning. 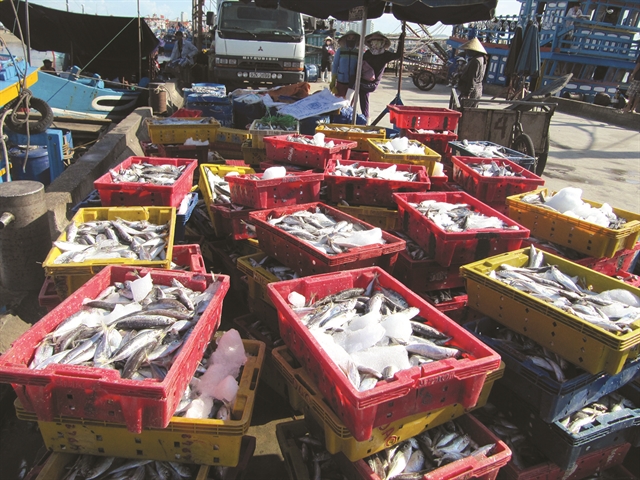 “It’s an easy catch. I spend two hours each morning pulling in my catch, and then I reset the nets. I only stop during the off-season and when cruise tours arrive,” he said.

Different hamlets used to specialise in catching fish, squid, shrimp and anchovy for fish sauce, as well as oysters, he explained.

Tiến, who is the last craftsman left in the former fishing village, said many villagers help out by weaving nets, repairing boats, and trading and processing fish.

An old man repairs a coracle on a beach off Sơn Trà. VNS Photo Công Thành

“I learnt how to make coracles, fish baskets and paddles,” he said.

“I’m busy all the time because the fishermen are too. I often repair coracles during the off-season when fishermen leave their boats on the beach,” he explained.

He said the trade earned him a living, but it was rare for young people to get into it as tourism and urbanisation were booming on the Sơn Trà Peninsula.

The fishing community had been resettled far from the beach to make way for hotels and resort development over the years, Tiến said.

He said only middle-aged men were still living by fishing because they had no other choice. The younger generation who were better educated could earn more from tourism and services.

Tiến said he was taught the bamboo craft by Phan Liêm, 81, who lives in Thọ An Hamlet.

He said he hoped community-based tourism would revive the fishing trade and crafts on the beaches of Sơn Trà.

The last fishing communities in the ancient villages of Mân Thái and Nam Ô still make fish sauce, despite the impacts of the industrial sauce trade.

It’s the biggest festival of the year to pay homage to the Sea God.

Nguyễn Đình Chơi, 73, said the festival dated back over 200 years.

Superstitiously, fishermen believe that whales will protect them from disasters, so whale temples can be found in many villages

The festivals were recognised as a National Intangible Heritage in 2017.

Director of the city’s Culture and Sports Department Huỳnh Văn Hùng said a plan to preserve ancient fishing villages and crafts had been mapped out for 2025-30. The idea is to preserve traditional cultural performance, temples and relics for tourists to enjoy.

Despite the high-rise hotels on the beach, the last fishermen can still find narrow channels to paddle their boats out for the early-morning catch.

“I feel lonely living far from the sea. For me, fishing is still a good trade, but it needs a face-lift to embrace community-based tourism – a sustainable trend for both trade preservation and fishing,” Dũng said.

“We can save the fishing industry by offering tours as well as home-stay services for tourists. This could help us save our fishing communities.” VNS

Fishing villages co-exist with development have 1181 words, post on vietnamnews.vn at May 10, 2020. This is cached page on Talk Vietnam. If you want remove this page, please contact us.