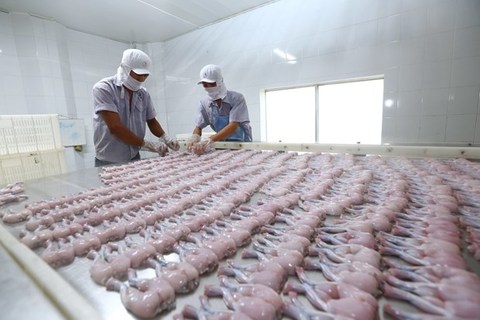 A frog meat processing line for export to the EU at Tan Thanh Loi Company in the southern province of Long An. — Photo vietnamplus.vn

The European Union (EU) – Viet Nam Free Trade Agreement (EVFTA) will officially take effect for both the EU and Viet Nam after the National Assembly ratifies and the two sides complete the notification procedures under the agreement.

The Ministry of Industry and Trade (MoIT) on Thursday said the country has been aggressively preparing for the approval process.

On February 12, the EP voted to approve EVFTA with 63.35 per cent of the votes in favour. On March 30, the European Council also approved the agreement, completing the final legal procedure according to the internal EU approval process.

In Viet Nam, the Government has submitted the records for EVFTA implementation, prepared by the ministry to President Nguyen Phu Trong then the National Assembly for approval.

The ministry also sent the President’s Office some additional information and documents for the submission of approval documents.

Recently, to serve the National Assembly’s Foreign Affairs Committee in appraising and ratifying the EVFTA, the MoIT sent a dossier of submission for approval with all required contents as well as introductory information and explanations about the agreement.

The ministry has worked with the President’s Office and Government Office to complete the document for the approval of the EVFTA for discussion at the NA Standing Committee’s 44th meeting scheduled on April 20 before it is submitted to the NA.

It has also worked with the EU in building and completing the mechanism for granting tariff-rate quotas to Vietnamese rice with a quota tax rate of 0 per cent when exported to the EU.

The ministry has drafted the main contents of the plan to prepare for the implementation of EVFTA, defining the objectives, key tasks and the co-ordinating units to implement the plan.

Luong Hoang Thai, director of the ministry’s Multilateral Trade Policy Department, said the MoIT’s implementation plan for the key tasks would be divided into two periods of 2020 and 2021-25.

Viet Nam accelerates process to put EU trade deal into operation have 484 words, post on bizhub.vn at April 17, 2020. This is cached page on Talk Vietnam. If you want remove this page, please contact us.