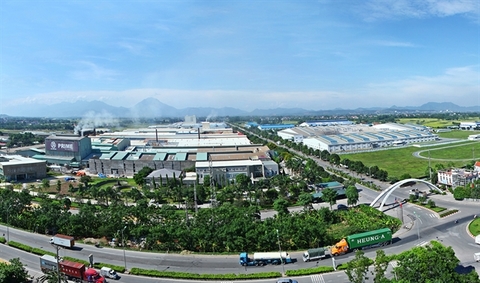 Vinh Phuc has planned to develop a total of 50 industrial parks and clusters, covering a total area of ​​more than 5,890ha. — Photo banqlkcn.vinhphuc.gov.vn

The northern province of Vinh Phuc has become popular among domestic and foreign investors thanks to its breakthrough on socio-economic development, favourable location, young population and abundant labour force and a high proportion of trained workers.

Located close to Ha Noi, Vinh Phuc has to date attracted 752 domestically-invested projects with a total registered capital of more than VND78 trillion (US$3.34 billion). It has also lured 378 foreign-financed projects worth more than $5 billion.

These impressive results are attributable to the province’s endless efforts to improve its investment climate and to facilitate investors to solve challenges to implement their projects in a timely manner.

In the past, the province has always ranked high on the Provincial Competitive Index (PCI) which has been conducted every year since 2005 by the Viet Nam Chamber of Commerce and Industry. The province received high rankings in terms of legal institutions, proactivity of provincial leadership and time costs and regulatory compliance as well as transparency and access to information.

However, the province’s investment attraction is yet to match its potential and expectations of local authorities who have considered inflows of domestic and foreign investment as important factors that will help the locality archieve its long-term goal.

Following to the goal, the province strives to become one of the country’s key industrial and service centres and a city directly under the Central Government by 2020. The province also targets to be a reliable destination for large businesses but also a place to live and work of talent and rich people.

In order to reach this ambition, Vinh Phuc needs quality investment projects that will bring great socio-economic efficiency. These projects will come into the industrial sector such as including automobiles, motorbike, electronics, telecommunication, food processing beside to those to be invested in the agriculture sector like hi-tech farming, clean fruits and vegetables, high-tech cattle and poultry breeding and agricultural processing.

The locality also needs projects to be invested in the service sector such as health-care, education-training, tourism as well as ones in infrastructure development including infrastructure constructions of industrial parks and complexes and the launches of industrial waste and water-treatment plants.

According to the provincial leaders, enterprises are important drivers of the province’s development. Creating a favourable investment and trading environment for them is the duty of the whole provincial administrative system and people.

Vinh Phuc is determined to improve the investment climate in all three areas of legal environment, infrastructure, and services, they said.

The locality will continue to improve the quality of the local administration through administrative reform, enhancing the provincial competitiveness index, developing a smooth, transparent and attractive investment environment, and creating optimal conditions for all economic sectors to operate in.

Meanwhile, the local administration will better deal with the difficulties and obstacles facing businesses to help them boost production. In the past, regular meetings between leaders of the provincial People’s Committee and local firms have been held with the same purpose.

Vinh Phuc Province in a nutshell

Vinh Phuc is located in the Red River Delta and the northern key economic region. Besides being adjacent to the Noi Bai International Airport, the province also lies on the economic corridor of Kunming-Lao Cai-Ha Noi-Quang Ninh.

After more than 22 years of re-establishment, the province’s socio-economy has made great progress and achieved important results in many fields:

– The economy has continuously grown with a positive average rate of 14.66 per cent during the 1997-2019 period. Industry-service accounted for 90 per cent of the economic structure.

– Vinh Phuc is currently one of leading contributors to the State budget.

– The province ranks in the top four localities nation-wide in term of adequate infrastructure facilities.

– The quality of labour resource is always highly appreciated by many businesses in compared to many localities in the region. — VNS

Vinh Phuc emerges as an attractive investment destination have 895 words, post on bizhub.vn at December 10, 2019. This is cached page on Talk Vietnam. If you want remove this page, please contact us.