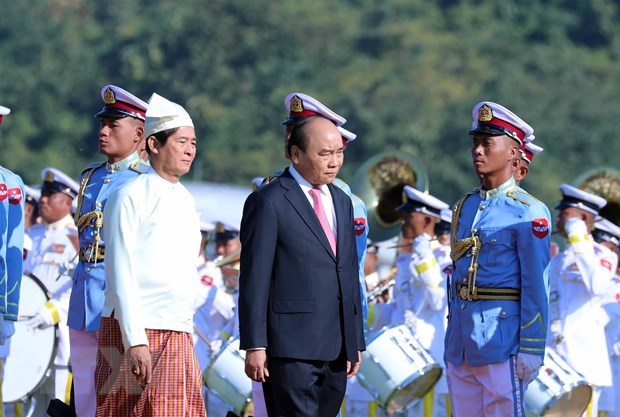 Both sides signed and exchanged four documents, including the Action Programme for the 2019 – 2024 period.

The two sides pledged to simplify procedures for Vietnam's exports, make it easier for Vietnamese firms to access more business opportunities in Myanmar, speed up licensing and offer incentives to Vietnamese investors, and meet their demand in the fields of telecommunications, mining, infrastructure, housing, urban technical infrastructure and transportation.

They also explored the possibility of establishing the Vietnam Industrial Park in Myanmar to draw more Vietnamese investment to the country.

Regarding regional and global issues, Myanmar congratulated Vietnam on winning a non-permanent seat at the United Nations Security Council for the 2020 – 2021 tenure with an absolute majority of votes.

The Myanmar side vowed to work closely and offer mutual support to Vietnam at international forums, especially when Vietnam assumes the ASEAN Chairmanship 2020, in order to maintain the solidarity, unity and central role of the bloc.

With regards to the East Sea issue, both sides expressed support for ASEAN's common stance and highlighted the need to settle disputes by peaceful means in line with international  law, including the 1982 UN Convention on the Law of the Sea, while maintaining freedom and ensuring maritime and aviation security and safety in the East Sea.

Khoi said as the two nations will celebrate the 45th anniversary of diplomatic ties next year, the visit once again affirmed the high level of trust between both sides and strengthened their cooperation in ASEAN.

In order to realise the outcomes of the visit, he suggested maintaining and effectively upholding bilateral mechanisms, particularly the Joint Commission for Bilateral Cooperation and the joint sub-committee on trade.

He expressed his belief that with high trust and determination, the two countries will find great cooperation opportunities and achieve positive results in the near future./.

Deputy FM: PM’s visit lifts Vietnam – Myanmar relationship have 851 words, post on en.vietnamplus.vn at December 19, 2019. This is cached page on Talk Vietnam. If you want remove this page, please contact us.