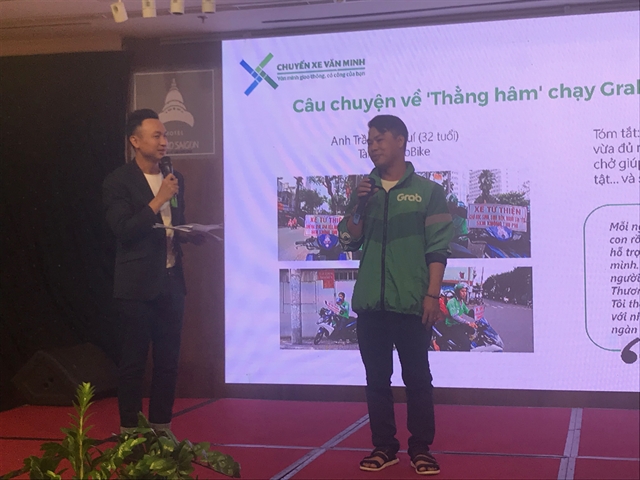 HCM CITY — Motorcycle taxi driver Trần Văn Quí called “a crazy man” by some people because he he attached a small board with the words “Free Charge for Students and People with Disadvantages” on his motorbike.

“In the beginning, I was sad because I was called that name. And then, I thought that the nickname was fun,” Quí said.

Quí, who is from the Mekong province of Đồng Tháp, became a motorcycle taxi driver in 2018. He was recently honoured for his “good behavior” as part of the Civilisation Trip campaign in HCM City.

He first had the idea of offering free rides when he noticed students walking under the sun and seniors walking home, sometimes as far as five kilometres, because they wanted to save a small amount of money for more vital daily needs.

“I earn VNĐ200,000 to VNĐ300,000 (US$8.7-12) each day and spend the remaining time driving disadvantaged people for free. The money is enough for me to raise my family. My wife and children support me so that I can provide free services for needy people,” Quí said.

At first, the students and other potential riders were afraid to accept a free ride, thinking they were possibly being cheated. And passengers who booked his service via Grab cancelled after seeing his charity board attached to his motorbike.

So, he changed the words from “charity” to “free charge”.

His service became well-known after information about it was found on social media and newspapers. This also helped to reduce the fears of potential riders.

“My family is not rich, but many people are poorer than I am. The money they pay for motorbike services could be used to buy a meal,” he said.

Quí also often rides to hospitals in the city to find people who need his free service.

Quí is one of several people involved in the transport sector in the city who were honoured by Tuổi Trẻ (Youth) Newspaper and the National Traffic Safety Committee, which co-organised the six-month Civilization Trip campaign.

The organisers called on everyone to share a meaningful event or story related to experiences they have had during traffic.

Participants could share photos or videos on Facebook with the hashtag #chuyenxevanminh or send their story to the email [email protected].

Among the 2,000 shared stories was one about Nguyễn Thị Rớt, 68, of Bình Thạnh District.

Rớt, who works as a bus assistant on bus No 14, often refuses to collect fees from the poor or homeless who sell lottery tickets.

She has given or lent money to the poor or to others on her bus who say they have lost money.

For example, the bus has a regular passenger who collects plastic waste to sell to earn income. One day, her leg became painful and Rớt immediately volunteered to lend VNĐ1 million for treatment, but the woman refused to accept the money.

“When I lend someone money, I don’t expect them to give it back to me. I don’t have a lot of money, but they need it more than I do. Everything I do comes from my heart,” Rớt said at the recent Civilisation Trip ceremony that honoured the people selected.

Rớt is loved by many bus passengers who say she has good behavior. She is the role model for other bus assistants to follow.

The HCM City Public Transportation Management Centre wants to develop such behavior in all bus assistants to improve services for passengers.

Trần Hữu Minh, deputy chief of the secretariat at the National Traffic Safety Committee, said: “This campaign is about a new way of communication in the traffic sector. It will inspire people to develop an awareness of good behaviour during traffic.”

The campaign is expected to be conducted in other provinces and cities, according to Minh. VNS