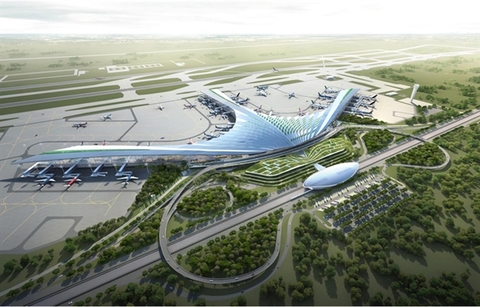 The model of the Long Thanh International Airport plan in the southern province of Dong Nai. — Photo courtesy of Airports Corporation of Viet Nam

Ninety per cent of all National Assembly deputies on Tuesday approved a Government resolution on the feasibility report for the phase-one development of the Long Thanh International Airport.

The plans include building a runway, a terminal and other components to serve 25 million passengers and 1.2 million tonnes of goods each year.

Total investment of the airport development project should not exceed VND336.63 trillion (US$16 billion) as approved in June 2015. The first phase of the project will cost about VND111 trillion.

The National Assembly also agreed to divide the national defence area of 1,050 hectares into two main parts. An area of 480 hectares will be used to develop the airport with military actions being prioritised.

The Government is trusted to select the contractors. According to the Chairman of the NA Economic Committee Vu Hong Thanh, the Long Thanh International Airport is a large-scale project that links to the national interest, national defence and security.

Therefore, it is important to select the right contractors to assure the socio-economic development. Plus, assigning the Government to choose contractors complies with the Law on Bidding.

On the same day, National Assembly delegates also approved the amended Law on Securities with more than 92 per cent of all deputies agreeing with the changes.

The new law contains 10 chapters and 135 articles regulating activities in the securities sector, rights and obligations of individuals and organisations, the operation of the securities markets, and the governmental management of the sector.

After debates, the new law states that private share issuance and sale of non-public companies must comply with the Law on Enterprises and relevant rules.

Thanh said on Tuesday the change would assure the legal system would be operated properly and the issuance and sale would be monitored closely, offering the best interest and benefit for businesses.

Non-public companies’ private share issuance and sale was written in the draft on amended enterprises’ law and the law was expected to get NA deputies’ approval in the next NA meeting, Thanh said.

Changes would be made to make sure the laws on securities and enterprises are connected, he added. The two laws will take effect on January 1, 2021.

Under the amended Law on Securities, the Vietnam Stock Exchange – which will manage the Ho Chi Minh and Ha Noi stock exchanges – will operate in the form of a business and the State will holds more than 50 per cent of total charter capital or total voting shares.

The Prime Minister is empowered to decide on the operation and organisation of the Vietnam Stock Exchange and its members. The exchange will be directly managed by the State Securities Commission.

Thanh said the Vietnam Stock Exchange would be the highest-level market regulator, which will benefit the market by issuing common indices and standards for the two exchanges.

But the two exchanges would keep operating separately and their merger would not be executed in the near future, Thanh said, adding the two local bourses would work as member companies of the Vietnam Stock Exchange.

More than 91 per cent of all NA deputies gave the green light to the resolution regulating the settlement of late, uncollectible tax liabilities.

The subject to the resolution includes people and organisations whose tax liabilities are produced before July 1, 2020. Those are individuals that are declared dead, missing or losing capacity of normal actions.

Meanwhile, organisations and businesses are those that have filed for bankruptcy and insolvency or their operations are destroyed by natural disasters and unexpected accidents.

Meanwhile, 94 per cent of all NA deputies approved the amended Law on Audit. — VNS

Resolution on Long Thanh International Airport approved: National Assembly have 723 words, post on bizhub.vn at November 27, 2019. This is cached page on Talk Vietnam. If you want remove this page, please contact us.