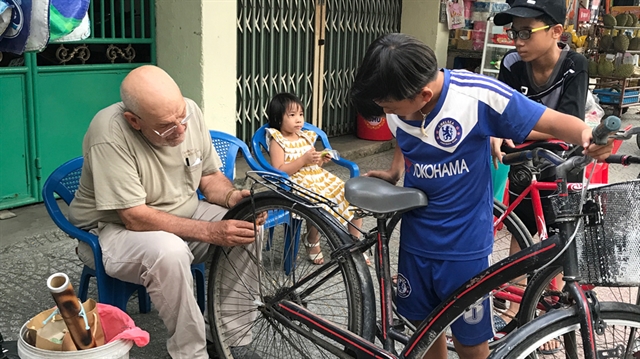 David Clark is seen sticking reflective tapes onto the bicycles of a passer-by in Đà Nẵng City. — Photo cadn.com.vn

Every day from 4 to 6pm, an elderly foreign man and his Vietnamese wife can be seen sticking reflective tape onto the bicycles of any passersby for free in Đà Nẵng City.

His name is David Clark, an American war veteran who previously served his country in Đà Nẵng. Now the city is his second home and a place where he helps heal the scars of war with modest but meaningful acts.

By sticking reflective tape on the bicycles, the 70-year-old man expects to help bikers avoid traffic accidents at night.

The tape is purchased and shipped to Việt Nam from the US and each red strip costs about US$400, while silver piece costs $250, all paid for from Clark’s savings and his friends’ support.

The idea of providing free reflective tape to bikers occurred to Clark after many field trips to mountainous A Lưới District in the central province of Huế to survey the construction of a school for disadvantaged children.

“I was driving a car to Huế one night and three bicycles just appeared in front of me out of nowhere. There were few street lights in the frontier areas so I could not see those bicycles at night. That’s when this idea appeared in my mind,” he recalled.

Clark and his Vietnamese wife, Nguyễn Thị Thanh Hương, aka Ushi Clark, started to offer free reflective tapes to bikers five years ago. At first, passersby hesitated to take them, but gradually, their meaningful acts have become familiar to locals.

“We plan on still doing it on the street but we are going to start focusing on the schools,” Clark said, adding that they also expect to receive support from local authorities.

To this elderly man, the city by Hàn River was associated with many memories of his youth.

His 20th birthday was celebrated in Đà Nẵng when he was a US marine stationed by Non Nước (presently Ngũ Hành Sơn) in 1968-1969.

Then in 2007 he had an opportunity to return to Việt Nam with a friend during a charity trip, but it was a difficult time for him.

“Going outside of the airport, I started to hesitate. I walked a few more yards and suddenly the heat hit me and then this humidity and smell. I was terrified when all the memories of the war came back to me. My first impression was to turn around and go back, I didn’t want to do it. But my friend continued walking and I followed him,” Clark recalled.

“And then we got to Sài Gòn and I saw it was very peaceful. I had never been to Sài Gòn before but I did find people welcoming and warming.

“We came for three days in Đà Nẵng. I did get a chance to the top of the marble mountain and it was a feeling of peace. When I looked around, there were no bombs, no flares, no artillery. I finally realised that Việt Nam was at peace and that I found peace here.”

In 2011, he gathered money to come back to Đà Nẵng and launched his own charity programme helping Agent Orange and dioxin victims. Two years later, he decided to sell his car and return to the country one more time, and on that trip he met his wife, and hasn’t left yet.

“The reason I chose Đà Nẵng is because the city is like a home to me. It is where I went from a young man to a man. Today I feel it is a beautiful place with peaceful people, beautiful beaches, beautiful rivers, beautiful bridges and the mountains are only five minutes away,” he said.

Clark and his wife are members of Veterans for Peace organisation, in which he works as both secretary and treasurer.

Together with other American veterans, the couple have travelled to remote and disadvantaged areas to conduct many charity programmes in local social welfare and handicapped centres. 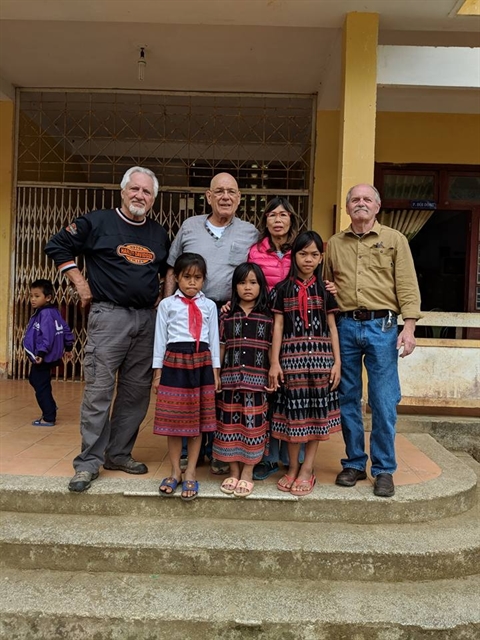 Clark (second from left) and his wife (third from left) poses with one of their friend and ethnic children during a charity programme. — Photo Mark Oconnor Facebook

In the past six years, Veterans for Peace has presented nearly 1,000 bicycles to poor children in the central region. Clark is a regular visitor to Đà Nẵng City’s social welfare centre to help and play with dioxin-stricken and disadvantaged children.

“David and his wife have contributed and supported the children in the centre,” said Tô Năm, the director of the centre. “The children feel very happy whenever David arrives. Through what he has done, we can feel his sincere affection for small children, disadvantaged plights and for the city by Hàn River.”

Now the 70-year-old has found peace and happiness in his new chapter of life.

“I have wonderful life now. I have never been happier in my whole life. When I was in the US, the Viet Nam War haunted me every day, every night, but when I’m in Việt Nam, the war has been over for 44 years and the people are at peace and I find peace here. The Vietnamese people treat me with great respect, far more than I deserve, and I’m truly a happy peaceful man today.

“In 1968, I come to Việt Nam to die for my country. I was very grateful that I didn’t although I was wounded. But today if it is God’s will, I will die in Việt Nam but it will be of old age and my own choosing and for that, I’m a very lucky man,” Clark said. VNS

American veteran finds peace in his new life in VN have 1260 words, post on vietnamnews.vn at November 7, 2019. This is cached page on Talk Vietnam. If you want remove this page, please contact us.