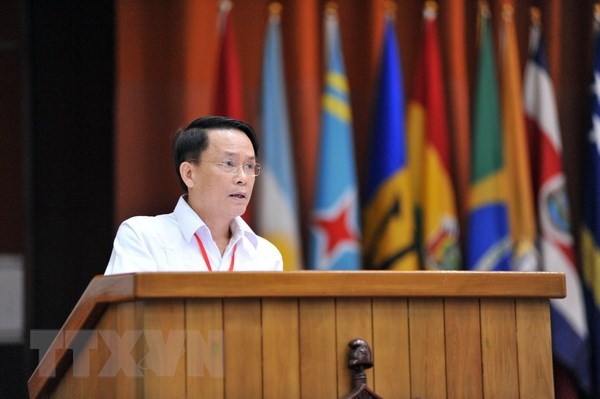 Hanoi (VNA) – A delegation from the Communist Party of Vietnam (CPV) led by Nguyen Duc Loi, member of the Party Central Committee and General Director of the Vietnam News Agency, attended the 24th Sao Paulo Forum in Havana, Cuba on July 14-17.

The delegation took part in all activities of the forum and delivered a speech on late President Fidel Castro's special relations with Vietnam at a special plenary session on July 17.

On behalf of the delegation, Loi underlined that Fidel is a great leader of international communist and worker movements, and a symbol of revolutionary heroism, and aspirations for freedom and happiness.

He highlighted that humanitarian internationalism initiated and led by Fidel had materially and spiritually supported many revolutions and movements for national liberation worldwide, including Vietnamese people's resistance war against the US.

The official recalled Cuba's support to Vietnam in the past even when the Caribbean country was facing numerous difficulties as a result of the embargo imposed by the US, quoting Cuban revolutionary leader Fidel Castro's saying that "For Vietnam, Cuba is willing to shed its blood."

He also recollected Fidel's historic visit to Vietnam's central province of Quang Tri in September 1973, the first trip by a foreign leader to a liberated area in Vietnam. During the trip, the Cuban Commander-in-Chief hoisted the Vietnamese liberation flag on top of a bunker formerly belonging to the enemy troops, and then urged the Vietnamese soldiers to "put up this glorious flag in the centre of Saigon." His wish came true two years later.

The forum attracted 625 delegates from 56 countries and 168 organisations across the world. They focused on discussing regional and international situations and emphasised the importance of gathering forces and devising measures to fight imperialists.

Many Latin American and Caribbean leaders committed to reinforcing solidarity between leftist forces in the region and the world. They have adopted 45 resolution and statements on socio-political issues in the region.

Created in 1990 as a result of the Permanent Conference of Political Parties of Latin America and the Caribbean, the Sao Paulo Forum is a space for dialogue, which attracts about 100 political parties, organisations and progressive movements in the region.

During their stay in Cuba, the Vietnamese delegation also paid courtesy visits to Miguel Diaz-Canel, President of the Council of State and Council of Ministers of Cuba and Mercedes Lopez Acera, Politburo member and Secretary of the Communist Party of Cuba (CPC) Central Committee.

Earlier, the CPV delegation had a working visit to the Republic of Dominica on July 11-13. They paid a courtesy visit to President of the Senate Reinaldo Pared Pérez, who is also general secretary of the Dominican Liberation Party (DLP), and held talks with General Secretary of the United Left Movement of the Dominican Republic (MIU) Miguel Mejía.

CPV delegation attends Sao Paulo Forum in Cuba, visits Dominica have 719 words, post on en.vietnamplus.vn at July 18, 2018. This is cached page on Talk Vietnam. If you want remove this page, please contact us.